Podium at Paul Ricard for Michimi and Cozzolino 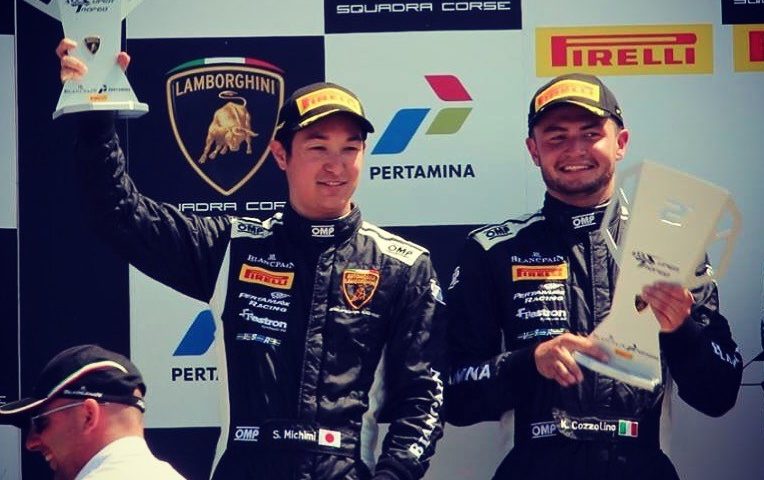 After 2 days of testing at the Adria circuit experimenting with radical setup changes to get a better idea of the car balance, Vincenzo Sospiri Racing and the #16 Lamborghini Huracán Super Trofeo driven by Shinya Michimi and Kei Cozzolino were ready for the weekend at Paul Ricard. Neither driver had been to the circuit before, so the practice sessions would have to be used to the maximum to learn the circuit, as well as to fine tune the car for the rest of the weekend. After improving from 13th overall (8th in Pro) in the first practice to 6th overall (4th in Pro) in the second practice, much had been learned and the team set about preparing the cars for qualifying.

Cozzolino was given duties for the first qualifying session. With a record grid of thirty-four cars competing, it was difficult to get a clear lap and the car was qualified in P11 for the first race to take place later that day. Michimi was able to place the car in P7 in qualifying 2, giving the car a solid starting position for Race 2 which would take place on Sunday.

Starting from P11 in Race 1, Cozzolino lost one place on the start but was able to get it back quickly and was running in 11th when the safety car came out. After running behind the safety car for three laps with the field bunched up, the pit window opened as the safety car pulled in. Vincenzo took advantage and called the perfect strategy, bringing both cars in for their stops. Michimi was able to come out in P4 after the pit stops and was quickly in heavy pursuit of the car in P3. After a few laps stuck behind the #26 car in P3, Michimi made his move and took the position. Unfortunately, some light contact in what would normally be deemed a racing incident, would later result in a penalty being assessed to the #16 car, after protests were made by the #26 car after the race. Michimi was able to run a really good pace for the rest of the race to build a substantial gap to P4 and would take the checkered flag in 3rd for the final step on the podium. However, as mentioned previously, a post race penalty would result in a loss of the podium and being demoted to a finishing position of P7.

Having qualified the car on row four for Race 2, Michimi would take the start, and got a brilliant start getting around Spengler right off the line. He would gain two more positions when the Raton Racing cars made contact with each other, bringing the safety car out. Having gone from P7 to P4 after lap 1, Michimi was sitting in a good position when the race resumed. He then ran a really quick pace to keep the gap to the leaders down, and was able to inherit another position when Kujala got a puncture, and was chasing down the Spinelli/Moscato car in 2nd, before coming in to hand over duties to Cozzolino. Cozzolino would gain another position in the pits coming out in P2 after the stop, and would continue to pull away from the rest of the field, bringing the car across the line in 2nd with a comfortable margin of eight seconds over P3. A well-deserved podium for Michimi and Cozzolino was the result on Sunday.

Shinya: “Well, I think it’s quite clear from the pace this weekend that we definitely made some strides from the previous round at Silverstone. This was the closest we’ve been to the top runners, less than a tenth off of the top time in Race 2. Unfortunately the contact in Race 1 would lose us a podium and some valuable points. In Race 2, we ran our own race and allowed everyone to crumble around us, which really worked in our favor. I’m looking forward to our next weekend in Spa, as it’s a historic circuit and I think we will be able to be competitive there as well.”

The next round will take place at the historic Circuit de Spa Francorchamps in the Arden Forest of Belgium. The race will be held in conjunction with the famous Spa 24 hours.