MICHIMI: “YOU COULD ALMOST CALL IT A DREAM SEASON” 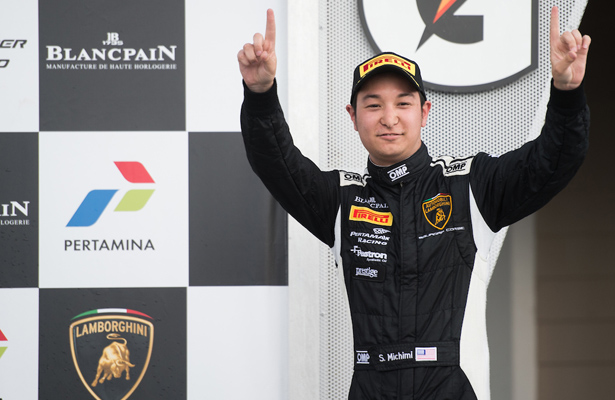 With six wins out of ten races, Shinya Michimi has been the standout driver in this year’s Lamborghini Blancpain Super Trofeo North America series, as he looks to continue his rise through the sports car racing ranks.

The 23-year-old Super Trofeo North America rookie locked up the Pro class title last month at Circuit of The Americas, with two races still to go this season in December at Valencia, site of the 2016 World Final.

For Michimi, who’s had to learn most of the circuits in his first full season of U.S. racing, leaning on the experience of Prestige Performance has come as one of the benefits.

“You could almost call it a dream season, so to speak,” Michimi told Sportscar365. “The team’s done a really good job to prepare everything for the entire year.

“The car’s been good every time we’ve gotten it off the trailer and that’s made it easier.

“I didn’t know a whole lot of the tracks before but they did a good job of getting me up to speed of what they were doing in 2015. Also I did a lot of work on iRacing before I went.

“It also helps that I’ve enjoyed a lot of the tracks. They’re still old-school enough that they’re not massive parking lots. I enjoy that more as it’s a bit more of a challenge.

“I went into each weekend trying a bit harder.”

While having been born and raised in the U.S., the Japanese-American has spent the majority of his racing career overseas, including stints in the MRF Challenge and Auto GP.

“Last year was a difficult year,” he said. “The team as well, had just switched to GT cars, so we were all learning at the same time.

“But it was a good environment for me to start my GT career that way because we could all work together.

“Doing it in Europe as well, the competition level was really high and the team levels were also really high. And obviously the tracks are really good to learn on as well.

“All of that put together, I think it really helped me this season because I was able to bring my experience to this team this year and get them up to speed.”

Michimi’s dominant season with the Wayne Taylor Racing-run organization, that included sweeps of the weekend at Watkins Glen and Virginia International Raceway, has put him in position to potentially step up to the IMSA WeatherTech SportsCar Championship next year.

For the Lamborghini Junior driver, remaining within the Volkswagen group of machinery is one of his objectives for 2017.

“My immediate goal for next year is that I’m trying to find something in the GTD class,” he said.

“I’d like to move up to a GT3 car and also run in a multi-class race; it’s always been an interest of mine. I feel that I’m ready.”

But he’s also laid out ambitious plans beyond GT3. “My ultimate goal is to be with an LMP1 team in the WEC,” said Michimi, who attended the recent Six Hours of Fuji race with Ricky Taylor and Max Angelelli.

“From a young age, when I was six years old or so, I watched every 24 Hours of Le Mans.

“I’m a huge fan of the whole series back then they were the LMP900 cars and they were some of the coolest things I’ve ever seen. Now they’re even cooler.”